In January of 1863 the parishioners of Saint Mary’s Church in La Crosse met to discuss the needs of the growing German-speaking population of the parish. Saint Mary’s, the first parish in the city of La Crosse, was founded in 1856, although the first religious service of Roman Catholics had been held already on August 24, 1855, in the courthouse under the pastoral leadership of the famous missionary to the territory, Father Henry Tappert. The members of Saint Mary’s were chiefly of three national origins: French, German and Irish. There were, however, also parishioners of Bohemian and Polish origin. Preaching, religious instruction and pastoral care were provided to the parishioners in English, German and French. At that time La Crosse was part of the Diocese of Milwaukee, under the Archdiocese of Detroit. 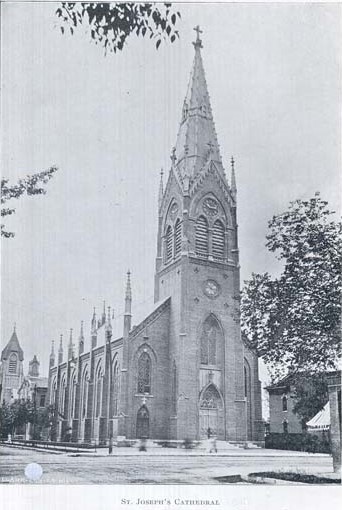 At the January 1863 meeting it was decided to form a new parish from the mother parish of Saint Mary’s to give more effective pastoral care to the ever larger German-speaking population. It was agreed that the English- and French-speaking members would remain at Saint Mary’s and that the new parish, under the patronage of Saint Joseph, Husband of Mary, would be for the German-speaking members. The so-called Horton Lot, on the corner of today’s Sixth and Main Streets, was purchased for the new parish at the price of $1,500.00. The first pastor of Saint Joseph Parish was Father C. J. F. Schraudenbach.

The members of the new parish attended to the building of a school for the religious instruction of their children. The school was opened and ground was broken for the church building in 1864. However, due to delays and difficulties, the cornerstone for the church was not placed until 1869. During the interim the members of Saint Joseph Parish continued to worship at Saint Mary’s.

In 1868 a significant event happened in the life of the young Saint Joseph Parish. On March 3 of that year, Pope Pius IX divided the Milwaukee Diocese into three parts, elevating Milwaukee to an archdiocese and creating two new dioceses, Green Bay and La Crosse, as suffragans of the new archdiocese. The first Bishop of La Crosse, Michael Heiss, chose Saint Joseph’s to be the cathedral parish of the newly-formed La Crosse Diocese.

The parishioners renewed work on the building of the church; and on the first Sunday in October 1870, it was dedicated by Father M. Kundig of Milwaukee, since Bishop Heiss had been called to Rome to assist at the first Vatican Ecumenical Council. By 1875 the parishioners had completely paid for the cost of construction of the new cathedral church.

During its first years the parish remained under the care of diocesan clergy. For a short period of time, beginning in 1877, it was confided to the care of Benedictine Fathers from Saint John Abbey in Collegeville, Minnesota. It was later returned to the pastoral care of diocesan clergy, who continue to serve the parish to the present. The young parish experienced its greatest growth and improvement in buildings and grounds under the leadership of Father Joseph B. Wiedmann. A new pipe organ was installed in the church, the spire was added to complete the front of the church and a new school building was erected in 1884.

By 1873 the Bohemian and Polish members of the parish had experienced such great growth in numbers that it was decided to form a proper parish for them. The parish, placed under the patronage of Saint Wenceslaus, was founded in 1874. The first pastor was a Franciscan priest from Prague in Bohemia, Father Leo John Suchy. In its first years the children of Saint Wenceslaus Parish continued to attend Saint Joseph School. By 1877, however, Saint Wenceslaus opened its own school.

In 1885 the Polish members left Saint Wenceslaus to form their own parish under the title of the Holy Cross. In the beginning Father Aloysius Blaschke, Pastor of Saint Wenceslaus, also served as pastor of Holy Cross Parish. Very soon after the founding of the parish, Holy Cross School was opened.

In later decades the parishes which had been divided from the mother church of Saint Mary would once again be united, merged into the Cathedral Parish, now under the title of Saint Joseph the Workman. Holy Cross Parish was closed and its facilities served for a time as the Newman Center for La Crosse State University, now UW-La Crosse. After the Newman Center moved into its current facility in 1964, Holy Cross Church and School were razed and the present Cathedral School was built on the site. Saint Mary Parish was closed in 1960 during the construction of the new cathedral church, but its church and school were used by the Cathedral Parish for the next two years. The site of Saint Mary’s Church and School is now occupied by the apartment buildings Stoffel Court and Becker Plaza. The current Cathedral School was built in 1969 jointly by Cathedral and Saint Wenceslaus Parishes. Saint Wenceslaus Parish was suppressed in 1974. Its church now serves Viterbo University as San Damiano Chapel, and its school is now the John Brophy Nursing Center. As part of a reconfiguration of the Coulee Catholic Schools system–now the Aquinas Catholic Schools–the Cathedral School now serves as the primary elementary school for all La Crosse city parishes, with students in four-year-old kindergarten through second grade. Students in grades three through six attend Blessed Sacrament School, and students in grades seven through twelve attend Aquinas Middle School and Aquinas High School.

In 1959 Bishop John P. Treacy, the Fifth Bishop of La Crosse, announced the building of a new cathedral. The original building was razed and the new cathedral was constructed on the same spot. The new cathedral is a contemporary interpretation of the gothic architecture of the original cathedral church. At the time of its dedication on May 14, 1962, the new cathedral was given the title of Saint Joseph the Workman, in honor of the new feast of Saint Joseph established by Pope Pius XII in 1955 to be celebrated each year on May 1, which in many parts of the world had become a holiday for workers. Pope Pius XII was trying to “Christianize” what had become a yearly show of military strength in communist nations. Bishop Treacy intended to honor the working-class character of the La Crosse Diocese. On May 9, 1969, the Cathedral of Saint Joseph the Workman was consecrated by Bishop Frederick W. Freking at the conclusion of the year-long celebration of the centennial of the La Crosse Diocese.

In March 2001 ground was broken by Bishop Raymond Burke for a new addition to the cathedral. Dedicated in December of the same year, this addition includes a gathering area, new handicapped-accessible bathrooms, an elevator to make all levels of the church accessible, a choir room and a library-conference room.

Bishop Frederick W. Freking, the Sixth Bishop of La Crosse, died on November 28, 1998, and is entombed with four of his five predecessors in the south wall of the Blessed Sacrament Chapel. (Bishop Michael Heiss was named Coadjutor Archbishop of Milwaukee in 1880, succeeding as Archbishop in 1881, and is buried there.) Bishop John J. Paul, a son of the Cathedral Parish and the Seventh Bishop of La Crosse, died on March 5, 2006, and is also entombed in the Blessed Sacrament Chapel.

The Eighth Bishop of La Crosse, Raymond L. Burke, served as associate rector of the Cathedral Parish from 1975 to 1980, when he was sent to Rome to earn a doctorate in canon law; and from 1984 to 1989, while serving as Moderator of the Curia until appointed Defender of the Bond at the Supreme Tribunal of the Apostolic Signatura in Rome. He was installed as the Bishop of La Crosse on February 22, 1995, and served here until being named Archbishop of Saint Louis on December 2, 2003. Archbishop Burke was named Prefect of the Supreme Tribunal of the Apostolic Signatura by Pope Benedict XVI on June 27, 2008, and was invested in the College of Cardinals on November 20, 2010.

The Most Reverend Jerome E. Listecki was installed as the Ninth Bishop of La Crosse on March 1, 2005. Soon afterwards he gave permission to proceed with plans to replace the cathedral pipe organs, which were in need of costly repairs. Bishop Listecki established a fundraising committee chaired by Monsignor Bernard McGarty, a senior priest who was a native of the former Saint Mary Parish in La Crosse. In December 2006 a contract was signed with the Noack Organ Company of Georgetown, Massachusetts, for the building of two new organs. The minor organ in the choir loft was removed after Easter 2009 and the choir loft was extended forward that summer and fall. Bishop Listecki was named Archbishop of Milwaukee on November 14, 2009, and was installed there on January 4, 2010.

On June 11, 2010, Bishop William P. Callahan, O.F.M. Conv., Auxiliary Bishop of Milwaukee, was appointed the Tenth Bishop of La Crosse. At that time work had just begun to remove the main pipe organ from the sanctuary. Effort was then focused on installing the new minor organ in the sanctuary in time for Bishop Callahan’s installation here on August 11. The effort was successful and the new minor organ was blessed and played at the 5:10 Mass on Saturday evening, August 7. On Sunday morning, November 7, 2010, Bishop Callahan presided over the blessing of the new main pipe organ in the choir loft, which was then played publicly for the first time during the 10:30 Mass.

On May 6, 2012, the Cathedral Parish will celebrate the 50th anniversary of the dedication of the current church and will begin a yearlong celebration of the 150th anniversary of its foundation. This milestone in our parish’s history encourages us to continue to look to the future and to the eternal reward God promises to his faithful ones. Many “have gone before us marked with the sign of faith.” (Cf. Eucharistic Prayer I) Nourished by the same sacraments and guided by the same light of faith, we pray for ourselves: “Lord…strengthen in faith and love your pilgrim Church on earth.” (Cf. Eucharistic Prayer III)